The History of Hearing Aids - Attune

The History of Hearing Aids

A Journey Through Time and the Marvels of Modern Hearing Care

What have Ludwig Van Beethoven, Ronald Reagan and Thomas Edison in common? Besides them being rather important historical figures, all three also suffered from a form of hearing impairment. And, they relied on hearing aids to improve their quality of life. Being born centuries apart, the then available hearing aids would vary greatly – in both looks and effectiveness.

From amplification devices and ear trumpets to modern hearing aids, hearing devices have evolved massively over the centuries. They may have humble beginnings, but luckily, they’ve come a long way.

You’re wondering what Beethoven’s hearing aid might have looked like? Well, let’s dive into the history of the hearing aid to find out!

Let’s explore the incredible advancements that have been made over the course of time!

The History of Hearing Aids – A Timeline

Hearing loss can have a huge impact on your life. It affects your social interactions, your emotional wellbeing and even your work-life. Modern hearing aids are small, battery-powered devices that improve your hearing drastically.

Hearing aids can be worn inside or behind the ear. Oftentimes, they’re barely noticeable to the people you’re interacting with. But that wasn’t always the case!

The so-called “Ear Trumpet”, is considered to be the first attempt to improve hearing by “funnelling” sound into the ear. The “Ear Trumpet” resembled an extravagant music instrument that attaches to the ear.

It was made from a variety of materials, including iron, glass and animal horns. Although being rather bulky, it became quite popular. It was oftentimes worn with an acoustic headband, to disguise the device in the user’s hair. Although, with a device of this size, one could only do so much hiding.

The first commercially available device was produced by Frederick C. Rein in London, 1800. Rein sold portable hearing fans and speaking tubes, which could amplify sound, too.

And yes, Ludwig van Beethoven was one of the more famous users of hearing aid trumpets.

Another noteworthy discovery was made during the same time period.  Rumour has it that Beethoven himself discovered “bone conduction”. It is, simply put, a process in which sound vibrations are transmitted through the skull to the brain. After losing most of his hearing, Beethoven would place one end of a rod in his mouth and rest the other end on the rim of his piano. This allowed him to “hear” the sound of his piano through vibrations.

The first electronic hearing aids appeared on the world stage in the 19th century. The invention of the telephone in 1876, delivered the necessary technology to control the loudness, frequency and distortion of sounds.

He called his invention the “akouphone”. The device cost a hefty US$400, which would be worth US$13,236.67 in 2020. It wasn’t an easily portable solution either. The akouphone was so large that it had to sit on a table. 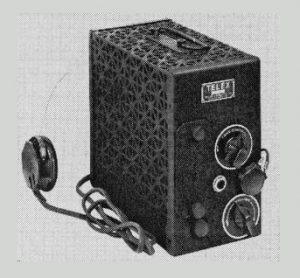 By 1902, Hutchison made sufficient enough tweaks to his original design to produce a much more portable version of his hearing aid. Still battery-powered, he called his update the “acousticon”. The American press showed great appreciation for his invention. It became famous as “the best electrical aid for the semi-deaf yet devised” and more than once was called a “miracle”.

Source: Surdus in Search of his Hearing

A vacuum tube hearing aid was patented by naval engineer Earl C. Hanson in 1920. This new kind of hearing aid made sound amplification a lot more efficient. It could help even those suffering from severe forms of hearing loss.

The vactuphone technology used a telephone transmitter to turn speech into electrical signals. The signals amplified as they moved on to the receiver.

The batteries, contained in a large compartment in the bottom of the case, still made the vactuphone rather cumbersome. Weighing in at just over three kilos, you could carry it around in a tiny suitcase. But back in 1920, batteries were quite expensive. The vactuphone cost US$135.00, now worth about US$1,742.00.

Over the following two decades, the vacuum tube hearing aid became more successful and slowly began to decrease in size.

The development of transistors in 1948 led to great improvements to the hearing aid. Transistors could now replace vacuum tubes which had the disadvantage of getting quite hot. Since these aids required less battery power, they became much smaller in size, too. They would soon look a lot more like the hearing aids we have today. And, they could be worn inside, or behind the ear.

Mass production in America began in 1951. But the time to market was so short, that transistor hearing heads had never been properly tested. As it was later found, transistors could get damp and cause the hearing aid to die after only a few weeks.  An extra layer of coating solved the problem.

In 1954, a Texan company produced a silicon transistor, which was more effective and reliable than its predecessor.

The era of the transistor hearing aid came to an abrupt end when Jack Kilby invented the integrated circuit, better known as the microchip, in 1958. His creation would lay the foundation for today’s hearing aid technology and transform the industry.

The age of digitalisation would allow hearing aids to become smaller and more powerful. From the 60s onwards, we would see hybrid devices that still relied on analogue features. Just a decade later, the creation of the microprocessor turned hearing devices into mini-computers. From then on, hearing aid technology would evolve rapidly.

In 1983, former US President Ronald Reagan could be seen wearing his hearing aid in the office. Reagan claimed that the hearing aid helped him overcome a difficulty in hearing high-pitched sounds. According to the New York Times, his hearing loss reportedly began in the 1930s, when a pistol was fired very close to his right ear.

The US president’s public acknowledgment was a critical mark for the hard of hearing community. It showed a powerful world leader encouraging the use of hearing aids. It would greatly reduce the negative stigma associated with hearing aids.

By the 1990s, digital hearing aids were unlike anything seen before. And yet another US president soon publically encouraged the use of hearing aids and the importance of hearing tests. As a music lover, Bill Clinton knew the dangers that came with listening at high volumes. Long-term exposure combined with a natural decline, lead him to need a hearing aid, which by 1997 were nearly invisible.

Digital technology took over the market in a storm. Personalisation was at the centre of advancements made in the following years.

From the 2000s on, hearing devices were fully adjustable to different forms of hearing loss. Hearing device wearers could now customise aural aids to their needs and preferences. This greatly improved the experience for many hearing aid wearers.

Today, almost any aspect of your listening experience can be customised. In 2010, the idea of Bluetooth was used, you may even connect your hearing device directly to tv and smartphone if you chose to do so. The sky seems to be the only limit!

The most common forms of hearing devices we see in 2020 are:

What is the Future of Hearing?

We’ve come a long way since the days of hearing trumpets made from animal horns. Beethoven would certainly not recognise the tiny devices we now call hearing aids.

What does the future hold? Hearing aids may one day be permanently implanted in the ear canal, offering superior sound quality and the ability to track vital signs. Artificial intelligence and digital assistance will most like play key roles in the future of hearing devices.

It is safe to say that the age of hearables has only just begun.

Attune Hearing is Australia’s only accredited hearing healthcare provider allowing you the choice of all hearing aid brands. We fit hearing aids for the patient’s budget, hearing needs and lifestyle.

If you would like to check out the latest updates in hearing technology, make an appointment with one of our highly qualified Audiologists today and find out which solution is the right fit for you. Call us on 1300 736 702 to book an appointment.